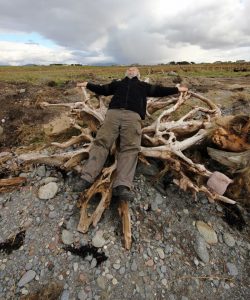 ted carving in Belfast in 1980 originally as some light relief from the tensions of the time. An early introduction to bog wood  quickly turned to an obsession and I have experimented with the material ever since. I have exhibited regularly in Ireland, Northern Europe and USA since my first solo show in Kennys (Galway) in 1991.

It’s the ancient nature of the timber that intrigues and confuses … a 5,000 year-old wood buried and preserved in the extensive bogland of Ireland. Some of these ancient trees died due to climatic changes, others due to the farming techniques of our stone age ancestors. Thousands of years later, they re-appear due to turf-cutting, drainage and occasionally, tidal action. Bog Oak, Bog Pine and Bog Yew.

That’s when I find them…..The bog wood seems to emit a haunting power – the perfect medium for a sculptor’s imagination who chooses to work with the material. Such treasures refuse to be forced.   bogwoodsculptor@gmail.com